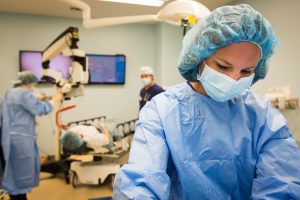 More than 1 in 10 female doctors and over 15 percent of all female residents have experienced sexual harassment within the last 3 years according to a Medscape Sexual Harassment of Physicians 2018 Report. Roughly half of the doctors reporting said that the person that harassed them was another physician.

Last year an NBC investigation shone a light on the widespread misconduct at hospitals and other health care settings, with females medical trainees reporting they are often sexually harassed, but do not report it for fear of retaliation.

Not only is the medical field traditionally male, but the hierarchical system of many hospitals lends itself to abuse from the top down. “Sexual harassment is a form of intimidation, a way to show someone where they stand in the pecking order”, says one victim, and the inherent power structure makes sexual harassment more common in the field.

One professor at the University of Michigan who is the director of the School’s Center for Bioethics and Social Sciences in Medicine agrees, “I think that things can get pretty bad pretty quickly in medicine in a way that might not happen in other workplace environments as readily…strong hierarchies and power differentials are at play”.